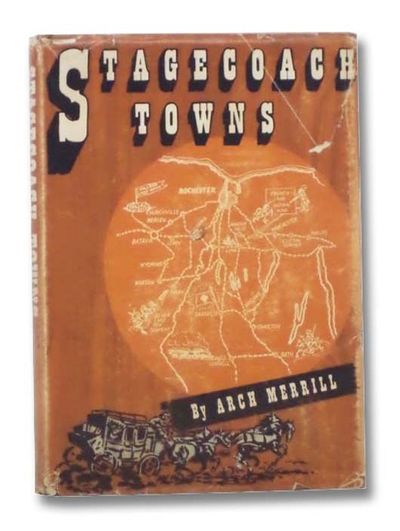 by Merrill, Arch
American Book - Stratford Press, Inc, 1956. Hard Cover. Very Good/Good. Meagher, Bob. Multiple tears to jacket previously mended on rear side, small chips and small tears to jacket edges. Page ridges very faintly foxed, bookplate on half-title page. 1956 Hard Cover. We have more books available by this author!. 186 pp. Black & white photographs. Historical writing about North Chili, Churchville, Bergen, LeRoy, Caledonia, Batavia, Wyoming, Warsaw, Perry, Dansville, Wayland, Cohocton, Bath, Hornell, Canisteo, Phelps, Manchester, Clifton Springs, Shortsville, Victor, Lima, East Bloomfield, Honeoye Falls, and Mendon, with mention of such notable figures as Frances E. Willard, Clara Barton, and Brigham Young. ABOUT THE AUTHOR: "Arch Merrill (August 5, 1894 - July 15, 1974) was a newspaper reporter for the Rochester, New York Democrat and Chronicle from 1923 to the late 1960s. He was a prolific writer, best known for his articles in the Sunday paper on history and folklore of the Genesee Valley and the Finger Lakes of upstate New York. He was sometimes called The Poet Laureate of Upstate New York. He authored a number of books, most of which are collections of his articles. Possibly his most famous was the 1943 A River Ramble, which is an account of his walk of the entire length of the Genesee River, along with his notes on local history, folk tales, and people he met along the route. (Inventory #: 2294613)
$15.00 add to cart or Buy Direct from
Yesterday's Muse
Share this item
Yesterday's Muse, Inc.
Offered by