Samantha at the World's Fair 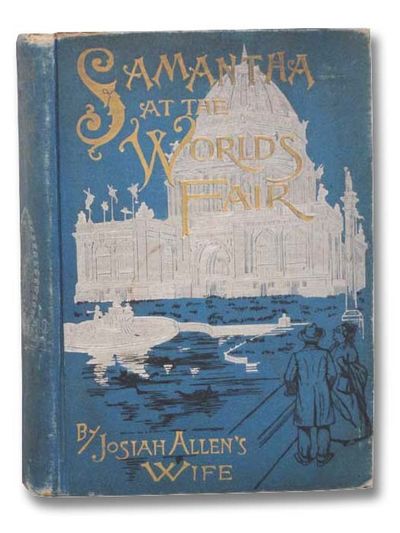 by Holley, Marietta (Josiah Allen's Wife)
Funk & Wagnalls Company, 1893. Hard Cover. Very Good/No Jacket. De Grimm, Baron C. [Constantin]. Early reprint ('40th thousand'). Edges rubbed, boards lightly soiled. 1893 Hard Cover. 694 pp. Turquoise cloth, gilt titles, silver and black decorations on front board and spine. Illustrations by 'Baron' Constantin De Grimm throughout. Part of a series of Samantha books satirizing American culture. ABOUT THE AUTHOR: "Marietta Holley (1836-1926), was an American humorist who used satire to comment on U.S. society and politics. Her successful series of "Samantha" books feature the character of Samantha Allen, a wise small-town woman, or "crackerbox philosopher," who goes on adventures in urban America and Europe, and her foolish husband, Josiah Allen. Holley was so skilled with satire and so popular that she was often compared to Mark Twain and Edgar Nye. Holley was born on July 16, 1836 to John Milton and Mary Tabor Holley, the youngest of seven children. They lived on a small farm in the town of Bear Creek, now called Pierrepont Manor. At the age of 14, she ended her formal education to help support her family by giving piano lessons. When she was 17, she converted to Baptism and joined the Adams Village Baptist Church. Her father died when she was 25, and Holley took charge of the farm and care of her sick mother and sister. After she became successful as a writer, she built a Mansion called "Bonnie View" near her family's home in Pierrepont. Holley never married. She died on March 1, 1926 at the age of 89. Holley enjoyed a prolific writing career, and was a bestselling author in the late 19th-century, though she was widely forgotten by the time of her death. Her first poems were published locally in the Adams Journal, which lead to later successes in more prominent periodicals, such as Peterson's Magazine. In 1872, her first novel, My Opinions and Betsey Bobbet's, was released by the American Publishing Company. Her most popular novel was probably Samantha at Saratoga, though sales statistics for this period are unreliable. Holley was known to be shy, and spent most of her life close to her family's farm, often writing her novels using maps and travel guides as resources. Despite her fear of travel, she did visit New York City periodically in her later life. She was well regarded by many contemporary writers and suffragists. Her famous friends included Susan B. Anthony, Twain and Clara Barton. Anthony frequently asked Holley to give speeches at suffrage conventions due to the strong stand Holley took in support of women's suffrage, though Holley refused public appearances. Holley is remembered as one of America's most significant early women humorists, along with Frances Miriam Whitcher and Ann S. Stephens. (Inventory #: 2294582)
$15.00 add to cart or Buy Direct from
Yesterday's Muse
Share this item
Yesterday's Muse, Inc.
Offered by