Proposal for Country Naval Free Schools, to be Built on Waste Lands. Giving such Effectual Instructions to Poor Boys as may Nurse them for the Sea Service. Teaching Them Also to Cultivate the Earth. 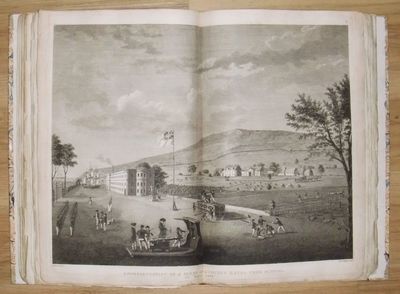 Hanway was an eccentric British merchant and a tireless worker for the betterment of mankind. Probably his most lasting contribution to society is the umbrella, which he is said to have popularized. His most important contemporary contribution was the Marine Society, an institution which taught young Britons to be sailors and outfitted them for sea. According to the DNB this institution sent nearly 5,500 boys into the Royal Navy between 1756 and 1762. Hanway summarizes his ideas in the present work, which was published just a few years before his death. In it he proposes a school for underprivileged youngsters, where they could learn farming and other trades. As a result the book concerns itself equally with farming, education and maritime matters. Its main goal, however, was to train boys to be seamen, and for this purpose a realistic replica of a man of war was to be erected on dry land. The book is notable for its large folding plates, and for forty-eight engraved plates of music, intended for moral and instructive amusement. In addition to the "Proposal," the book contains "Songs, and Moral Advice for Students," each with its own engraved title. See DNB vol. XXIV, p. 312. Adams and Waters, 1981. Untrimmed. A few inches of the centerfold of the man-of-war plate are torn with no loss. Light offsetting to the plate showing the training ship. A very good copy in twentieth century half calf in contemporary style with six raised bands, vellum corners, and plum leather label. This is a rare book. Worldcat shows only two libraries holding copies. (Inventory #: 41360)
$2,000.00 add to cart Available from
Ten Pound Island Book Co.
Share this item

Fall River and its Industries.

New York , Atlantic Publishing and Engravin
(click for more details about Fall River and its Industries.)
View all from this seller>