Narrative of a Voyage to the Pacific and Beerings Strait. 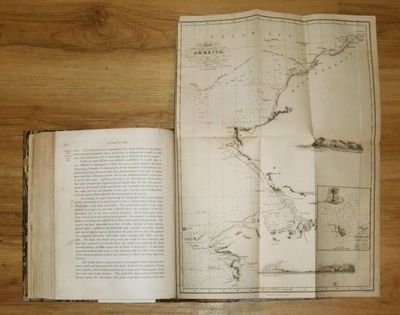 This is the esteemed "Admiralty Edition" - 4to rather than 8vo in format, with the two volumes bound together. The earliest, and best edition of an important voyage, as Beechey, in cooperation with Franklin and Parry, attempted to locate a Northwest passage. In the Pacific he discovered several islands and also visited Tahiti, Hawaii, and Pitcairn, where he met John Adams, survivor of the Bounty mutiny. Adams lengthy account of the mutiny is included in Beecheys narrative. Beecheys work provides an important account of Monterey and San Francisco before the American conquest - Hill 93. Arctic Bib. 1228. Complete with half titles, errata slips, adverts, and all maps and plates as called for. Bound in antique-style quarter calf over marbled boards with original spine label. Some of the pages edges and upper corners of plates show water staining. Generally solidly bound and in very good condition. (Inventory #: 41335)
$3,750.00 add to cart Available from
Ten Pound Island Book Co.
Share this item

History of Fall River, with Notices of Freetown and Tiverton, as Published in 1841...

Fall River , Almy & Milne
(click for more details about History of Fall River, with Notices of Freetown and Tiverton, as Published in 1841...)

An Historical Sketch of Fall River from 1620 to the Present Time.

Fall River , Benjamin Earl
(click for more details about An Historical Sketch of Fall River from 1620 to the Present Time.)
View all from this seller>