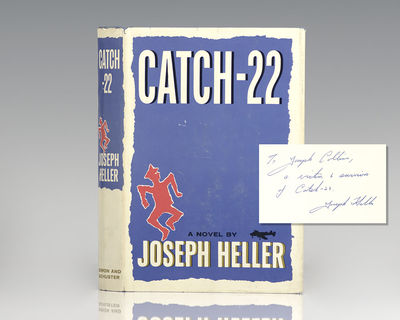 by Heller, Joseph
New York: Simon & Schuster, 1961. First edition of Heller's classic first book. Octavo, original blue cloth. Association coy, inscribed by the author on the front free endpaper, "To Joseph Collins, a victim & survivor of Catch-22, Joseph Heller." The recipient was a senior United States Army officer who served in World War II in both the Pacific and European Theaters of Operations, one of a few senior American commanders to do so. He was Chief of Staff of the United States Army during the Korean War. Near fine in a near fine dust jacket with light rubbing. Bookplate. Jacket design by Paul Bacon. Author's photograph by Seymour Linden. An exceptional association. "Catch-22, Joseph Heller's first and best-known novel, depicts a military world turned upside down. In Heller's World War II, a supplies manager has more power than a general, and anyone seeking a discharge on the grounds of insanity is declared sane enough to keep on fighting. When the novel appeared in 1961, World War II veterans appreciated its satire of the military bureaucracy and chaos of war. By the mid-1960's, it had become a cult classic among counterculture activists for its biting indictments of war. Many consider the novel to be the definitive statement of the modern antiwar position. The phrase 'Catch-22', symbolizing the absurdity of all institutional logic, has become a permanent part of our language" (NYPL Books of the Century 177). Basis for the 1970 film directed by Mike Nichols. The cast included Alan Arkin, Bob Balaban, Martin Balsam, Richard Benjamin, Olimpia Carlisi, Art Garfunkel, Jack Gilford, Charles Grodin, Bob Newhart, Anthony Perkins, Paula Prentiss, Martin Sheen, Jon Voight, and Orson Welles. (Inventory #: 108633)
$8,800.00 add to cart or Buy Direct from
Raptis Rare Books
Share this item