The Sorrows of Werter: a German Story 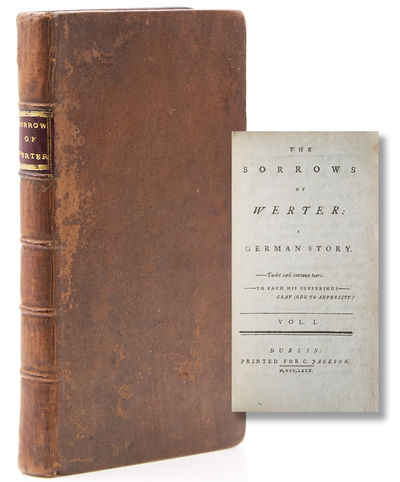 by [Goethe, Johann Wolfgang von]
Dublin: C. Jackson, 1780. First Dublin edition. vii, [i], 105, [1]; [iv], 122 pp., with half-titles. 8vo. Contemporary speckled calf, red morocco spine label. Light scuffing to covers, else a fine copy. First Dublin edition. vii, [i], 105, [1]; [iv], 122 pp., with half-titles. 8vo. The rare first Dublin edition of Goethe's immensely popular Sturm und Drang epistolary novel of unrequited love. First published in German 1774 and in English translation (from the French) in 1779 in London, from which this first Dublin edition takes its text. According to ESTC, the translation is variously ascribed to Richard Graves and Daniel Malthus. The novel propelled Goethe to fame throughout the continent and initiated a "Werther Fever" which lead young men to mimic the dress, mannerisms and, in some rumored cases, the means of death of the titular hero. ESTC T155711 (6 copies); Garside, Raven and Schowerling 1779:10 (see notes) (Inventory #: 315473)
$3,250.00 add to cart or Buy Direct from
James Cummins Bookseller
Share this item
James Cummins Bookseller Inc.
Offered by

The Holy Bible, containing the Old and New Testaments: together with the Apocrypha ... Embellished with Ten Maps and Forty Historical Engravings

by (Bible in English)

Philadelphia : Mathew Carey, No. 122 Market-Street , 1811
(click for more details about The Holy Bible, containing the Old and New Testaments: together with the Apocrypha ... Embellished with Ten Maps and Forty Historical Engravings)
View all from this seller>