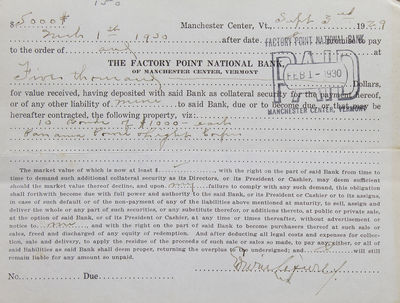 by Lefèvre, Edwin
Various places, 1929. Various sizes. Fine condition overall. Various sizes. An archive of material related to the writing career of Edwin Lefévre (1871-1943), the famed documentarian of Wall Street in the first decades of the 20th century. Lefévre's first book, Wall Street Stories (1901), was a series of eight lightly fictionalized accounts of Wall Street operators which created a model Lefévre would follow for the rest of his career. Two of his later works on Wall Street, Reminiscences of a Stock Operator (1923) and The Making of a Stockbroker (1925), have become classics of the literature of finance.

Most of the work published in his nine books initially appeared in magazines, and much of the material in the present archive is comprised of incoming correspondence from editors of the leading magazines of the day where Lefévre's pieces first appeared. Also present is Lefévre's retained copy of his publishing contract for Wall Street Stories; several handwritten letters from Lefévre to his wife while on a transatlantic voyage with the publisher of the Saturday Evening Post; a promissory note signed by Lefévre; publisher sales reports; a collection of 21 volumes from Lefévre's library, most inscribed by the authors; and other material

Comprising:
Agreement for the publication of "Wall Street Stories," 2 pp, between Lefévre and publisher McClure, Phillips & Company, July 5, 1901, standard printed contract completed in type, signed by John S. Phillips as Vice-President of the McClure, Phillips, & Co., publisher's embossed seal. The contract stipulates Lefévre's commission of the retail price of each cloth-bound book sold to be 10% of the first 5,000 copies sold; 12.5% of the next 5,000; 15% of the third 5,000; and 20% of all copies sold thereafter.

A series of 6 Autograph Letters Signed ("Ed"), 9 pp, on board the Cunard R.M.S. "Aquitania" and London, July 1927, to his wife Martha Lefévre. Affectionate letters written while on excursion with Saturday Evening Post editor George Horace Lorimer, regarding shipboard activities, a man going overboard, antiquing, work on articles, shopping in London, his health, etc. WITH: TLS of Lorimer to Martha Lefévre, 2 pp, Philadelphia, June 17, 1927, on Saturday Evening Post letterhead, humorously imploring her to allow EL to accompany him on said transatlantic journey in order that EL might undertake a series of articles for the Post. (A more detailed inventory available upon request.)

A group of 50 Typed and Autograph Letters Signed, approximately 80 pp, to Lefévre, nearly all from editors at various American magazines for which Lefévre wrote, including McClure's, Saturday Evening Post, Everybody's Magazine, the American Magazine, and Harper's; many prodding Lefévre for overdue stories and many others suggesting edits to submitted to articles. These include discussions of "The Millionaire Maker"; "What Availeth It?; "The Reason Why"; the plates for "The Golden Flood" and "Wall Street Stories"; "The Lizard"; "The Plunderers"; a German translation of "Sampson Rock"; a story on Senator Nelson Aldrich; and other works. Correspondents include George Horace Lorimer, John O'Hara Cosgrove, Gilman Hall, H.M. Alden, F.A. Duneka, Stella Virginia Roderick, John M. Sidall, John S. Phillips, Senator Albert J. Beveridge, and others. Also present are letters from Lefévre's brother Ernesto, about investment opportunities in Panama. (A more detailed inventory available on request.)

Proof sheets of the biographical entry on Lefèvre for the "50-Year Book" of his alma mater, Lehigh (class of 1891), 5 pp

Two Doubleday, Page & Co. sales reports, for "The Golden Flood" and "Wall Street Stories, for the period February 1 to August 1, 1909

Boston : The Four Seas , 1922
(click for more details about Geography and Plays. Foreword by Sherwood Anderson)

Boston : Houghton, Osgood and Company , 1880
(click for more details about Confidence)
View all from this seller>