Death Of A Salesman. 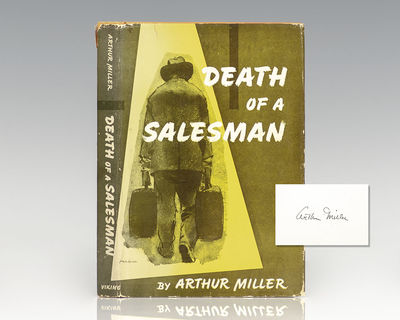 by Miller, Arthur
New York: The Viking Press, 1949. First edition of the first play to win all three major drama awards upon its opening in 1949: the New York Drama Critics Circle Award, the Tony Award, and the Pulitzer Prize. Octavo, original orange cloth, pictorial endpapers. Boldly signed by Arthur Miller in a contemporary hand on the second free endpaper. Near fine in a near fine first issue dust jacket. Jacket drawing by Joseph Hirsch. When Death Of A Salesman premiered in 1949, it was an instant success and secured Arthur Miller's place as one of the great American playwrights of the 20th century. It was the recipient of the 1949 Pulitzer Prize for Drama and Tony Award for Best Play. The play premiered on Broadway in February 1949, running for 742 performances, and has been revived on Broadway four times, winning three Tony Awards for Best Revival. (Inventory #: 107533)
$3,000.00 add to cart or Buy Direct from
Raptis Rare Books
Share this item