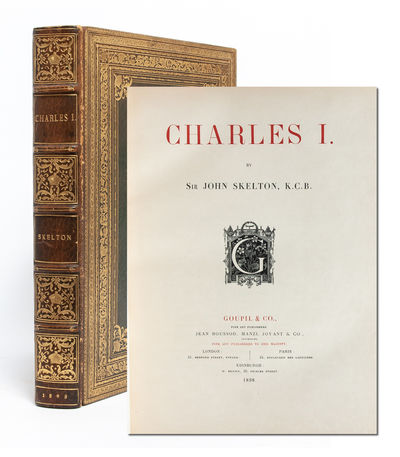 by Skelton, Sir John
London: Goupil & Co, 1898. First edition. Near Fine. Finely bound in full crushed morocco with five bands to spine and ornate gilt to spine and boards. All edges brightly gilt. Turn-ins gilt. Blue and brown morocco doublures. Silk moire endpapers. Number 378 of 500 copies printed on Japanese paper. Spine gently sunned; some bumping to corners. Front hinge tender but holding well. Light offsetting to endpapers. Internally wide margined and unmarked, with just a hint of toning to some margins. A lovely copy of Sir John Skelton's posthumously published biography of a controversial English king. The second son of King James of England & Scotland and Queen Anna of Denmark, Charles I was not the heir the court had planned upon; but on the untimely death of his elder brother, Charles ascended, radically changing the English monarchy forever. A firm proponent of the Divine Right of Kings, a lover of theatre and masque performance, and the husband of a Catholic princess from the de Medici line, Charles' controversial decisions in his brief reign led to his public trial and beheading, initiating the nation's brief move from monarchy to Commonwealth. Here, Skelton urges readers to recognize that they cannot understand Charles I's place in Constitutional history without having a broad perspective -- knowledge on the Tudors and Stuarts who preceded him. To this end, Skelton draws from English and Scottish archives to create a fuller history of the man and events that led to the Commonwealth period and whose son would ultimately restore the monarchy. Near Fine. (Inventory #: 3126)
$1,250.00 add to cart or Buy Direct from
Whitmore Rare Books
Share this item