Ivanhoe, A Romance (in 3 vols) 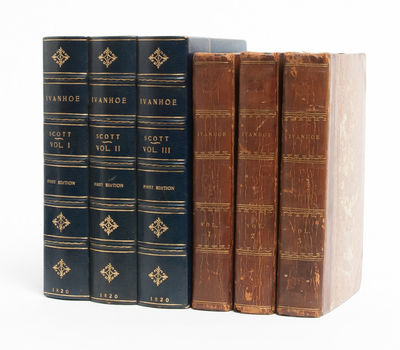 by [Scott, Sir Walter]
Edinburgh: Archibald Constable, 1820. First edition. Contemporary quarter calf over marbled boards with gilt to spines. Generally a bit shelfworn on extremities; joints cracked but overall holding quite well. All three volumes square and tight. Bookplate of Captain Colin Campbell Addpatrick to the front pastedown of each and ink ownership signature of the same on titles and half titles; contemporary gift note inserted into the front of volume III. Pages 95-126 a bit proud on volume I; pages 33-46 and 117-122 proud on volume II. Measuring 114 x 184mm and collating [6], xxxiii, [1, blank], 158, 151-298; [6], 327, [1, blank]; [4], 371, [1, blank]: including titles and half-titles, but lacking the publisher's adverts to the rear of volume III. With the first issue mispagination from 159 onward, but lacking several other points in Worthington. Internally a clean and pleasing set, with only a slight bit of scattered foxing to the margins, as is common in imprints of this period.

Scott's influential and admired historical novel about Sir Wilfred of Ivanhoe. Scott had already established his fame as an author of historical novels, particularly the Waverley novels which mainly featured Scottish history. But for Ivanhoe, Scott turned back to the medieval age in English history to explore the clashes of culture and ideals. Scott's Ivanhoe greatly influenced the vogue for English medievalism that would endure long after Ivanhoe's publication. (Inventory #: 3119)
$1,500.00 add to cart or Buy Direct from
Whitmore Rare Books
Share this item