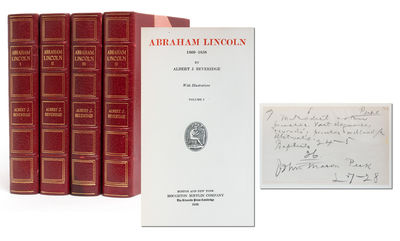 by Beveridge, Albert J.
Boston: Houghton Mifflin, 1928. First edition. Near Fine. Four volumes finely bound in crushed three-quarter morocco with gilt to spines. Top edges brightly gilt. Small bumps to corners of volumes I and II; gentle shelfwear to the bottom edges of several volumes. Bookplate of Mary Andrews Kilgour to front pastedown of each volume. Internally pleasing, bright, unmarked, and partially unread with some pages uncut, containing 4 frontispieces and 32 plates and maps. In all a lovely set. One of 1,000 copies (of which this is 113) containing a handwritten page from Beveridge's working manuscript tipped into the front of volume I. Progressive era leader Albert Beveridge entered American politics as a U.S. senator in 1896, becoming an avid supporter during Theodore Roosevelt's presidential campaign of 1912. Later in his career, Beveridge developed a reputation as a historian. He served as secretary of the American Historical Association, and he won a Pulitzer Prize for his biography of Supreme Court Justice John Marshall. The present biography of Abraham Lincoln was his final and one of his most significant projects, published posthumously. Considered one of the most honest and detailed accounts of Lincoln's life and the lead up to his presidency, the present work "stripped away the myths and revealed a complex and imperfect politician." The result of his work was a continued national fascination with Lincoln, and with the real lives of American leaders. Near Fine. (Inventory #: 3097)
$2,500.00 add to cart or Buy Direct from
Whitmore Rare Books
Share this item