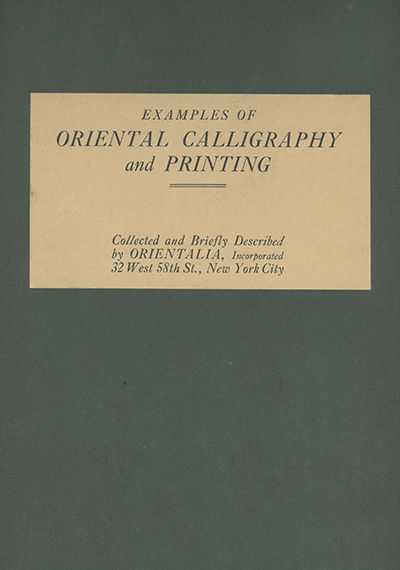 OCLC records 17 copies in three separate records, none outside the U.S.

by [LEAF BOOK: ASIAN PALEOGRAPHY & PRINTING]
New York: Orientalia, Incorporated, [1924], 1924. First edition, limitation not stated. OCLC records 17 copies in three separate records, none outside the U.S.. The leaves overall are very good condition, with the expected occasional staining and wear to the edges (most notably in the Arabic manuscript on vellum), browning and worming to a few of the older leaves; the portfolio boards are slightly worn.. Portfolio, 37 x 27 cm, printed paper label on the upper cover. 20 examples of printed and manuscript leaves (18 single and two double leaves), from the 14th to the 19th centuries, each with a small printed label identifying the leaf, neatly affixed to the lower margin or verso. A wide-ranging and interesting collection of Asian manuscript and printed leaves, issued as a leaf book; the only commentary is in the identification of the leaves. From the few copies that have come onto the marketplace in recent years, it appears that the contents vary somewhat from copy to copy. The examples in this copy date are from both sacred and secular sources. The earliest is a leaf from a 14th century Arabic manuscript on vellum; the most recent is a leaf from a manuscript of the Saddharma Pundarika Sutra, in Chinese, copied by a Japanese priest in 1834. Other examples include a leaf from a Japanese manuscript on secret Buddhist rites, written in Chinese by a priest at Kya-san, and dated 1571; a leaf from a Persian manuscript, containing the Poems of Nidhami, dated 992 of the Muhammadan era - or about 1584; a leaf from a Persian manuscript (Miraj Nama) describing Muhammad's ascent to heaven, dated H. 1046 or 1636 A.D.; a leaf from Indian religious manuscript containing extracts from the Puranas, in Sanskrit, 18th century; a double leaf in Chinese characters, printed in Korea, probably 18th century, which contains Buddhist scriptures as interpreted by the Syen sect; and a printed leaf from a Chinese medical work of the 17th century. A complete list of the leaves is available. Orientalia, Incorporated, was a bookseller and publisher in New York that specialized in all things Asian during the first half of the 20th century. Among other notables, they published the works of Yone Noguchi. The individual leaves were originally stored in 18 paper glassine envelopes; due to the browning of the envelopes, the leaves have been removed and placed in mylar sleeves. (Inventory #: 28163)
$6,500.00 add to cart or Buy Direct from
Brick Row Book Shop
Share this item

The Captives. A Tragedy. As it is Acted at the Theatre-Royal in Drury-Lane, by His Majesty's Servants

London: Printed for J. Tonson, 1724 , 1724
(click for more details about The Captives. A Tragedy. As it is Acted at the Theatre-Royal in Drury-Lane, by His Majesty's Servants)

A Winter in Central America and Mexico

Boston: Lee and Shepard, 1886 , 1886
(click for more details about A Winter in Central America and Mexico)
View all from this seller>