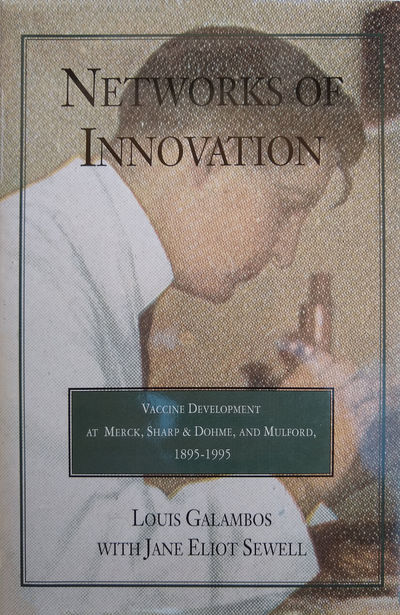 by GALAMBOS, Louis (b. 1931); SEWELL, Jane Eliot.
Cambridge:: Cambridge University Press, 1995., 1995. 8vo. 273, [1] pp. Index. Blue silver-stamped cloth, dust jacket. INSCRIBED by both authors, with Christmas card "Lots of love to the family, Jane and Lou". Fine. ISBN: 0521563089 "Networks of Innovation offers an historical perspective on the manner in which private-sector organizations have acquired, sustained, and periodically lost the ability to develop, manufacture, and market new serum antitoxins and vaccines. The primary focus is on the H. K. Mulford Company, on Sharp and Dohme, which acquired Mulford in 1929, and upon Merck & Co Inc., which merged with Sharp and Dohme in 1953. By surveying a century of innovation in biologicals, the authors are able to analyze the conditions that either promoted or prevented creative changes in this important industry. They show how the activities of these three commercial enterprises were related to a series of complex, evolving networks of scientific, governmental, and medical institutions in the United States and abroad. This is the first such history to draw exclusively on sources internal to Merck, one of the world's leading innovators in modern vaccines and pharmaceuticals." – Cambridge University Press. (Inventory #: PW1273)
$18.00 add to cart Available from
Jeff Weber Rare Books
Share this item