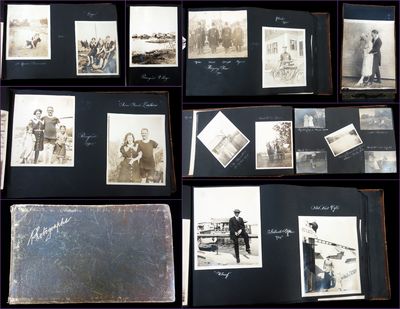 New England, 1912-1917. The Rowley family was a prominent Massachusetts family connected to the Merriam family (of Merriam-Webster Dictionary fame). The album was sourced from a descendant of the Arthur Merriam Rowley (1883-1979). Arthur was born on August 3, 1883 in Springfield, MA to Hiram Curtis Rowley (1844-1922) and Thirza Jane Merriam (1845-1919). He was the grandson of Homer Merriam (on his mother side), who was one of the three Merriam brothers (Charles, George, and Homer) who became famous for printing the Merriam-Webster Dictionary. Arthur grew up in Springfield, MA with one older brother, Harold Merriam Rowley (1879-?). He would marry Earla Viola Steade (1887-1966) on August 16, 1911 in San Diego Ca. They had two children, Douglass Steade Rowley (1913-2007) and Earla Steade Rowley (1916-1993). Arthur died on August 9, 1979 in Springfield, MA.. A photo album belonging to the Rowley family consisting of their vacation family photos from a variety of locations in New England in the early 20th century. Some of the vacation spots are: Bellow Falls, VT, Pemaquid Beach, ME, York Beach, ME, Kittery Point, ME, Portland, ME, Provincetown, MA, Nashua, NH, Gloucester, MA, Newport, RI, Boston, MA, and Lake Attitash, MA. The photographs consist of a variety of subjects- mainly photographs of the family themselves and the landscape and monuments at the places they visited. The family photos depict a relaxed family engaging in a variety of activities such as clamming, fishing, boating, walks, and photography. The majority of the photographs are labeled, either with the subjects name or location, and it is often times dated. The photographs in the album range form 1912-1917. There are over a hundred and ninety (190) photographs spread out over approximately 90 pages. The majority of the pages have two 4 3/4" x 3 3/4" photographs per page, though a portion do have larger groupings of smaller photographs. There is one large photograph of a couple, 9" x 7", attached to the interior front cover. Brown leather covers, with the gilded stamped text "Photographs" on the upper left corner of the front cover. Interior pages are black, with string binding. Measures 11 3/4" x 7 1/4" (Inventory #: 29005367)
$325.00 add to cart or Buy Direct from Eclectibles
Share this item