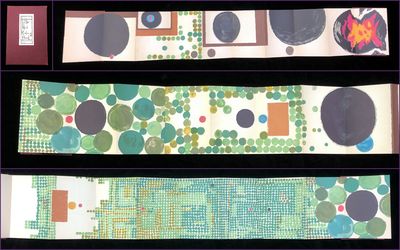 by Warja Honegger-Lavater (illustrator)
New York: The Museum of Modern Art, 1971. Warja Honegger-Lavater was born in Winterthur, Switzerland in 1913 to Emil Lavater and Mary Lavater-Sloman. She studied at Zurich School of Applied Arts, and after graduation she became a succesful graphic designer. She married Gottfried Honegger in 1940 and had two daughters, Bettina and Cornelia. She moved to New York in 1958. She died on May 3, 2007.. Little Red Riding Hood is an accordion style folding book that tells the classic tale using abstract symbols rather than written language. At the beginning of the book there is a legend of symbols- colored dots or geometric shapes- used to tell the story. For example Little Red Riding Hood herself is a red dot, the wolf is a black dot, the house is a brown square and grandmother is a blue dot. By using these pictorial symbols, the artist, Warja Honegeer-Lavater, reinterprets the tale into a brightly colored abstract book that allows the tale not to be constrained by the text.The original book done by the artist and published in France in 1965 by Ateliers Arte Paris. MOMA recreated the artist's book in 1971. This book is considered to be one of the first known 'modern artist books', was a part of a fairy series done by Honegeer-Lavater that included such works as: Little Tom Thumb, Snow White, Sleeping Beauty, and Cinderella. Maroon boards slip case and covers. Paper cover labels on slip case and covers. Measures 6 3/4" x 4 1/2". (Inventory #: 29015848)
$200.00 add to cart or Buy Direct from Eclectibles
Share this item