In the Night Kitchen. 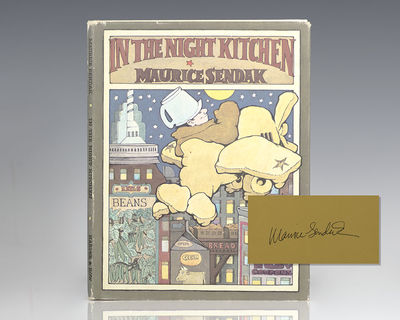 by Sendak, Maurice
New York: Harper & Row, Publishers, 1970. First edition of Sendak's classic work. Quarto, original cloth, illustrated throughout. Boldly signed by Maurice Sendak on the front free endpaper. Fine in a near fine first-issue dust jacket with the correct code and without the Caledecott medal adhered to the front panel. A very sharp example. Sendak's homage to New York City and the movies of the 1930s, In the Night Kitchen "spins the reader through the surreal fantasy of a child's dream, like Alice into Wonderland or Dorothy into Oz." Like most of Sendak's work, Kitchen is "a celebration of the primal, sensory world of childhood and an affirmation of its imaginative potency" (Silvey, 586). Having received nine awards, The Night Kitchen's popularity is evident, but so is its controversy. When three-year-old protagonist Mickey enters the Night Kitchen, he loses his pajamas and is fully naked in some parts of the story. Some critics have objected to Mickey's nudity, which is fully depicted, and others have interpreted sexual innuendo in the proceeding events. Consequently, the book's release in the United States sparked debate, with the inclusion of child nudity frequently noted as morally problematic. The book has been ranked 25th place on the "100 Most Frequently Challenged Books of 1990-2000" list by the American Library Association. (Inventory #: 71892)
$1,000.00 add to cart or Buy Direct from
Raptis Rare Books
Share this item