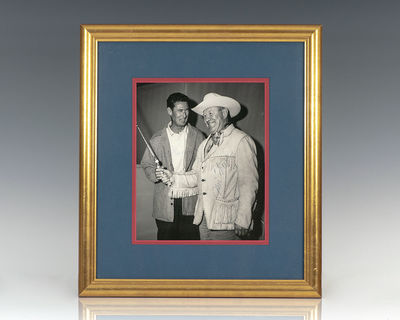 signed first edition
by Williams, Ted and Jim Thorpe
Rare original photograph of Olympic Gold medalist Jim Thorpe and Baseball Hall of Famer Ted Williams smiling together at the New England Sportsman's and Boat Show in 1952. Signed by both Williams and Thorpe. Double matted and framed; the photograph measures 9.5 inches by 7.5 inches. The entire piece measures 16 inches by 14 inches. An exceptional . American athlete and Olympic gold medalist James Francis Thorpe became the first Native American to win a gold medal for the United States in the 1912 Summer Olympics in Stockholm, Sweden. Considered one of the most versatile athletes of modern sport, he also played collegiate and professional football, and professional basketball. Ted Williams played his entire Major League Baseball career as a left fielder for the Boston Red Sox from 1939 to 1960. In the 1941 All-Star Game, Williams batted fourth behind Joe DiMaggio, who was in the midst of his record-breaking hitting streak, having hit safely in 48 consecutive games. Williams' 1941 season is often considered to be the best offensive season of all time, though the MVP award would go to DiMaggio. (Inventory #: 96152)
$3,500.00 add to cart or Buy Direct from
Raptis Rare Books
Share this item