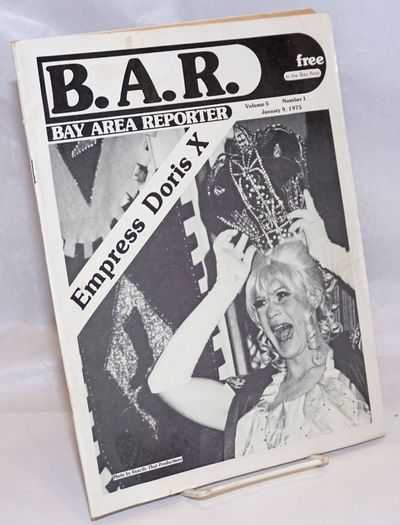 by Ross, Bob & Donald McLean, editors and publishers, Harvey Milk, G. Ashey Martinson, Doris X, et al.
San Francisco: Benro Enterprises, 1975. Magazine. [32p] 8x10.75 inches, photos, ads, articles, listings, reviews, services, personals, mild wear otherwise a very good magazine-style newspaper in stapled glossy wraps and newsprint. San Francisco-Bay Area's long-running, respected, homophile/LGBT newspaper, a free entertainment and services biweekly community paper. Two articles from Harvey Milk. The 10th Annual Coronation Ball report. In the early days, pre-AIDS, pre-White Night Riots, the political reports were mainly on the campaigns for Empress. Yet with an increase in police & political abuse of gay rights (note the attempt by Republican George Dye to pass a bill requiring all homosexuals be castrated) and the advent of gay activists like Reverend Ray Broshears, the paper began to publish an increasing number of political and gay-rights reports. The emphasis continued to be Drag shows, Tavern Guild and S.I.R. reports. Book, film and stage reviews relating to the gay experience. For the most part, this was an exciting and fun period in the Castro and the early issues reflect that. An important record of the early days of Gay Liberation in SF. (Inventory #: 244554)
$25.00 add to cart or Buy Direct from Bolerium Books
Share this item