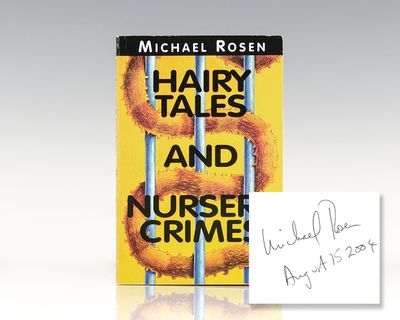 by Rosen, Michael
London: Collins, 1995. First edition of Michael Rosen's collection of comical spins on classic tales. Octavo, original pictorial wrappers. Inscribed by the author on the verso of the half title page, "Michael Rosen, August 15, 2004." In near fine condition. English children's novelist and poet Michael Rosen authored 140 books throughout his career and served as British Children's Laureate from June 2007 to June 2009. Perhaps his best-known work, We're Going on a Bear Hunt, won numerous awards and became the subject of a Guinness World Record for "Largest Reading Lesson" with a book-reading attended by 1,500 children, and an additional 30,000 listeners online, in 2014. Hairy Tales and Nursery Crimes is composed of 24 spin-offs on classic folk and fairy tales including: Jack and the Tinstalk, Goldisocks and the Wee Bears, and The Three Little Wigs. (Inventory #: 88121)
$45.00 add to cart or Buy Direct from
Raptis Rare Books
Share this item