Jacob Lawrence: The Frederick Douglass and Harriet Tubman Series of 1938-40 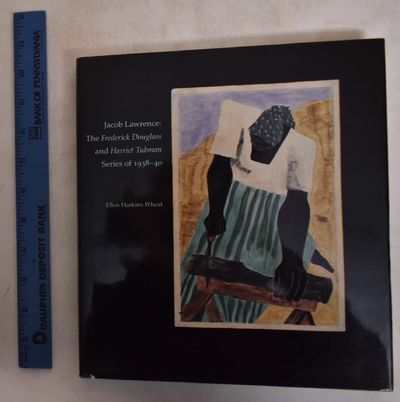 by Wheat, Ellen Harkins
Hampton, VA: Hampton University Museum, 1991. Hardcover. Good+ presentation copy signed by the artist and his wife in 1991. (very light foxing to block edges, ink underlining of text throughout). Green cloth over boards with gilt lettering on spine, black color glossy dustjacket. 127 pp. 6 bw, 63 color plates. Between 1938 and 1940, American artist Jacob Lawrence (1917-2000) "painted the Frederick Douglass and Harriet Tubman series, which although completed at the beginning of his career remain some of his strongest work. These two narrative sequences present the dramatic lives of two American slaves who escaped to freedom in the North and became major figures in the fight against slavery. ... [This book] documents these two intriguing series for the first time. All sixty-three panels of the two sequences are reproduced in full-page color with their narrative captions. In her essay on the paintings, Wheat discusses the artist, his work, and his motivations to create the two series. She also explores the lives of Frederick Douglass and Harriet Tubman, and describes their contributions to America's development as a nation." (dj). (Inventory #: 173912)
$100.00 add to cart or Buy Direct from Mullen Books
Share this item