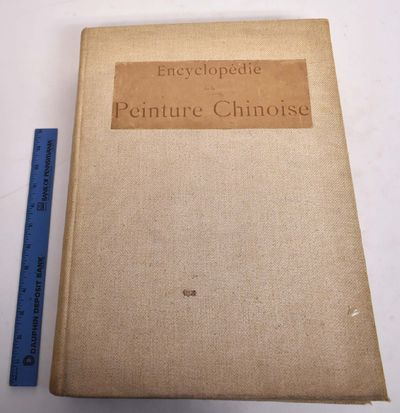 by Raphaël Petrucci; Edouard Chavannes; Liufang Li; Xinyou Shen; Yu Li; Gai Wang
Paris: H. Laurens, 1918. Limited, 428 / 550 copies printed. Hardcover. VG, covers are somewhat soiled but sturdy. Contents clean with two old repairs to inner tears on the first three leaves not bad. Beige cloth with mounted title from original paper wraps on cover, spine and rear panel. xii, 519 pages with approximately 500 illustrations. Text is in French. Edited by É. Chavannes, after the death of the translator./ Originally published in 4 collections or series (1st ser., in 1679; 2d and 3d, in 1701; and 4th, in 1818) The plan of the work was developed by Shen Xinyou from an album prepared by Li Liu-fang and the first three series were edited by with the help of Li Yu, who also contributed the introduction to the 1st ser. Wang Gai and his brothers, Wang Shi and Wang Nie, were chiefly responsible for preparing the commentaries and reproducing the plates from famous masters. The 4th ser. was largely the work of Ding Gao./ Contains the first three series. Limited to 550 copies, this being number 428. "Translation and commentary by Raphael Petrucci, augmented by a preface, a biographical dictionary of painters and a vocabulary of technical terms; illustrated with about five hundred engravings." Shipping weight is 17 pounds. (Inventory #: 173971)
$500.00 add to cart or Buy Direct from Mullen Books
Share this item