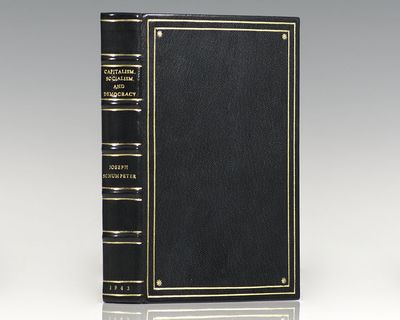 by Schumpeter, Joseph A
London: George Allen & Unwin Ltd, 1942. First edition of Schumpeter's ground-breaking work. Octavo, bound in full navy blue morocco, marbled endpapers, gilt titles to the spine, double gilt ruled to the front and rear panel, raised bands. In fine condition. Capitalism, Socialism and Democracy is widely considered one of the greatest works on social theory written in the 20th century. Named by Modern Library as one of the 100 best non-fiction books of the twentieth century and by The Times Literary Supplement as one of the 100 most influential books since World War II. (Inventory #: 108759)
$2,500.00 add to cart or Buy Direct from
Raptis Rare Books
Share this item