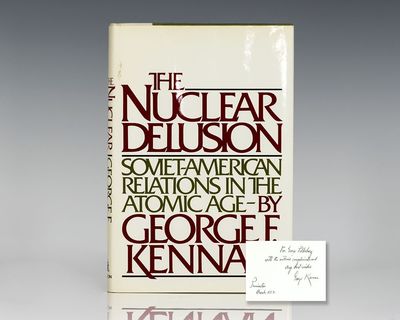 by Kennan, George F
New York: Pantheon Books, 1982. First edition of this Kennan work, which reviews the complex issues that must be addressed if the United States is to make rational, prudent decisions about future nuclear weapons systems. Octavo, original half cloth. Presentation copy, inscribed by the author on the front free endpaper, "For George Pillsbury with the author's compliments and very best wishes George Kennan Princeton March 1983." The recipient George Pillsbury was a Minnesota politician and heir to the Pillbury Company. Fine in a near fine dust jacket. Jacket design by Robert Anthony. George F. Kennan was the ambassador to Soviet Union who revealed numerous details of Soviet plans and asked for immediate containment of communism by US. He was known best as an advocate of a policy of containment of Soviet expansion during the Cold War on which he later reversed himself. He lectured widely and wrote scholarly histories of the relations between USSR and the United States. He was also one of the group of foreign policy elders known as "The Wise Men". During the late 1940s, his writings inspired the Truman Doctrine and the U.S. foreign policy of "containing" the Soviet Union. His "Long Telegram" from Moscow during 1946 and the subsequent 1947 article "The Sources of Soviet Conduct" argued that the Soviet regime was inherently expansionist and that its influence had to be "contained" in areas of vital strategic importance to the United States. These texts provided justification for the Truman administration's new anti-Soviet policy. Kennan played a major role in the development of definitive Cold War programs and institutions, notably the Marshall Plan. (Inventory #: 73061)
$450.00 add to cart or Buy Direct from
Raptis Rare Books
Share this item