Our Friends from Frolix 8. 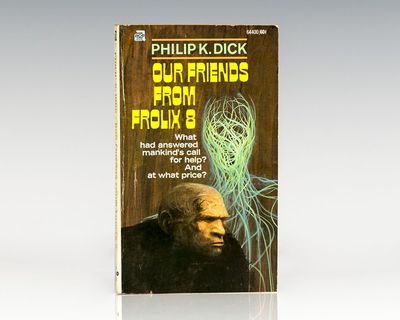 by Dick, Philip K
New York: Ace Publishing Corporation, 1970. First edition of this satirical adventure which deals with issues of power, class, and politics, set in a world ruled by big-brained elites. Octavo, original wrappers as issued. In very good condition. In the 22nd Century, the Earth is ruled by the "New Men", humans with superhuman mental abilities, who share power with "Unusuals" that possess psionic abilities, such as telepathy, telekinesis and precognition. (In its use of psionic abilities as a major plot element, this work is similar to Ubik.) To fight them, Thors Provoni has gone deep into space to find help. He is returning with a sentient protoplasmic alien being, a "Friend from Frolix 8", (known as Morgo Rahn Wilc) to fight for the "Old Men" (non-telepathic humanity, also incapable of enhanced cognitive abilities). (Inventory #: 74067)
$25.00 add to cart or Buy Direct from
Raptis Rare Books
Share this item