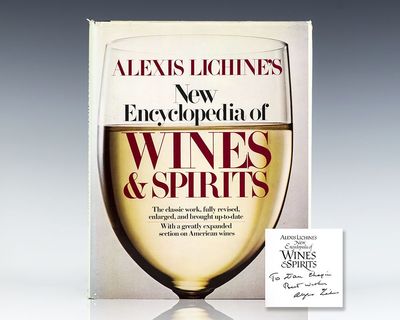 by Lichine, Alexis
New York: Alfred A. Knopf, 1967. Early printing of the revised edition of this comprehensive guide to wines and spirits. Quarto, original half cloth, illustrated. Boldly inscribed by the author on the half-title page, "To Dan Chapin best wishes Alexis Lichine on the half-title page. Near fine in a near fine dust jacket. Jacket design by R. Scuddellari. In collaboration with William Fifield and with the assistance of Jonathan Bartlett, Jane Stockwood, and John Laird. Alexis Lichine was a wine writer and entrepreneur. He played a key role in promoting varietal labelling of wine, was a masterful salesman of wine, and owned Chateau Prieure-Lichine and a share of Chateau Lascombes in the Medoc. Starting around 1940, Lichine and Schoonmaker promoted the idea that California producers should label their wines by the grape variety or varieties from which they were made. The standard practice among New World producers was to give their wines semi-generic labels. That is, they named them after the regions whose wines they resembled. For example, full-bodied red varieties might be labeled "Burgundy", whereas crisp whites might be labeled "Chablis". California's Wente Vineyards was the first winery to adopt the practice. After calling its Sauvignon blanc by its varietal name rather than labeling it "Graves," Lichine and Schoonmaker found its sales volume to increase several-fold. More important, they were able to sell it in the important east coast U.S. market. Others, such as Robert Mondavi, soon adopted the practice, which has become the standard for New World (and, increasingly, some Old World) wines. (Inventory #: 76091)
$225.00 add to cart or Buy Direct from
Raptis Rare Books
Share this item