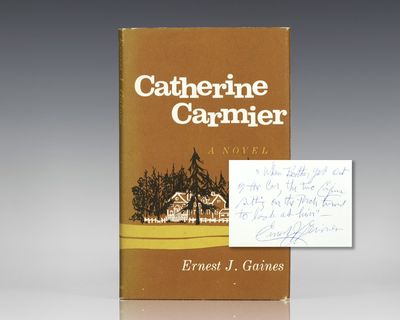 by Gaines, Ernest J
New York: Atheneum, 1964. First edition of Gaines' first book. Octavo, original half cloth. Signed by the author on the title page with the added words, "When Brother got out of the car, the two Cajuns sitting on the porch turned to look at him. Ernest J. Gaines." Fine in a near fine dust jacket with a touch of shelfwear. A unique example. Catherine Carmier is a compelling love story set in a deceptively bucolic Louisiana countryside, where blacks, Cajuns, and whites maintain an uneasy coexistence. "[Gaines's] best writing is marked by what Ralph Ellison, describing the blues, called near-tragic, near-comic lyricism" (Newsweek).His 1993 novel, A Lesson Before Dying, won the National Book Critics Circle Award for fiction. Gaines has been a MacArthur Foundation fellow, awarded the National Humanities Medal, and inducted into the French Ordre des Arts et des Lettres (Order of Arts and Letters) as a Chevalier. (Inventory #: 29006)
$1,150.00 add to cart or Buy Direct from
Raptis Rare Books
Share this item