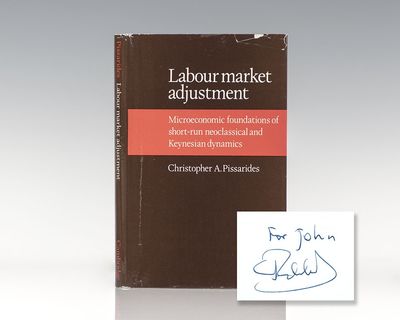 by Pissarides, Christopher A
Cambridge: Cambridge University Press, 1976. First edition of Pissarides' first book. Octavo, original cloth. Inscribed by Christopher Pissarides on the title page. Laid in is Pissarides' business card from the London School of Economics and Political Science also inscribed by him in addition to a small clipping from envelope in which the book was shipped in the author's handwriting. Fine in a near fine dust jacket. Christopher Pissarides interests focus on several topics of macroeconomics, notably labour, economic growth, and economic policy. In 2010, he was awarded the Nobel Prize in economics, jointly with Peter A. Diamond and Dale Mortensen, for his contributions to the theory of search frictions and macroeconomics. (Inventory #: 88029)
$600.00 add to cart or Buy Direct from
Raptis Rare Books
Share this item