No Bull: My Life In and Out of Markets. 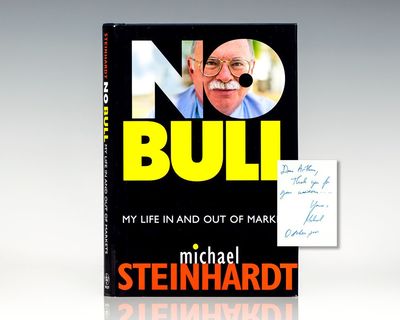 by Steinhardt, Michael
New York: John Wiley & Sons, 2001. First edition of Steinhardt's autobiography, who is one of the most successful money managers in the history of Wall Street. Octavo, original boards, illustrated. Presentation copy, inscribed by the author on the front free endpaper, "Dear Arthur, Thank you for your wisdom...Yours Michael October 2001." The recipient, Arthur Levitt , who was the twenty-fifth and longest-serving Chairman of the United States Securities and Exchange Commission (SEC) from 1993 to 2001. He was widely hailed as a champion of the individual investor. Fine in a fine dust jacket. Jacket design by Loretta Leiva. When the official history of twentieth-century Wall Street is written, it will certainly contain more than a few pages on Michael Steinhardt. One of the most successful money managers in the history of "The Street," Steinhardt far outshone his peers by achieving an average annual return of over thirty percent-significantly greater than that of every market benchmark. During his almost thirty-year tenure as a hedge fund manager, he amassed vast wealth for his investors and himself. One dollar invested with Steinhardt Partners L.P., his flagship hedge fund, at its inception in 1967 would have been worth $462 when he retired from active money management in 1995. No Bull offers an account of some of the investment strategies that drove Steinhardt's historic success as a hedge fund manager including a focus on his skills as an industry analyst and consummate stock picker. He also reveals how his uncanny talent for knowing when to trade against the prevailing market trend-a talent that was not always appreciated by several erstwhile high-profile clients-resulted in many of his greatest successes. Here he provides detailed accounts of some of his most sensational coups-including his momentous decision, in 1981, to stake everything on bonds-and his equally sensational failures, such as his disastrous foray into global macro-trading in the mid-1990s. (Inventory #: 75096)
$300.00 add to cart or Buy Direct from
Raptis Rare Books
Share this item