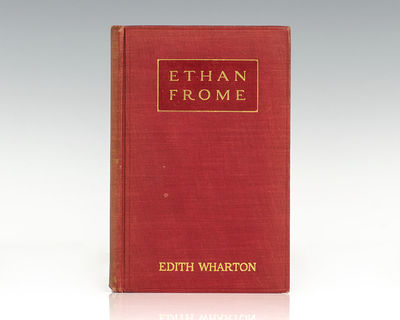 by Wharton, Edith
New York: Charles Scribner's Sons, 1911. First edition, first issue with "wearily" in perfect type on penultimate line of page 135 and with four pages of publisher's advertisements at rear, of Wharton's greatest tragic story, a "grim tale of a bud of romance ice-bound and turned into a frozen horror in the frigid setting of a New England winter landscape" (The New York Times). Octavo, original cloth, gilt titles to the spine and front panel, gilt topstain. In near fine condition. From the library of Michael Sadleir with his bookplate to the pastedown. Sadleir was a British publisher, novelist, book collector, and bibliographer. Sadleir began to work for the publishing firm of Constable & Co. in 1912, becoming a director in 1920, and chairman in 1954. In 1920 as editor of Bliss and Other Stories by Katherine Mansfield for Constable he insisted on censoring sections of her short story Je ne parle pas francais which show the cynical attitudes to love and sex of the narrator. Her husband John Middleton Murry persuaded Sadlier to reduce the cuts slightly (Murry and Sadleir had founded the avant-garde quarterly Rhythm in 1912) After the end of World War I, he served as a British delegate to the Paris Peace Conference, 1919, and worked at the secretariat of the newly formed League of Nations. As a literary historian, he specialized in 19th century English fiction, notably the work of Anthony Trollope. Together with Ian Fleming and others, Sadleir was a director and contributor to The Book Handbook, later renamed The Book Collector, published by Queen Anne Press. An exceptional example, with noted provenance. There are only three or four American novelists who can be thought of as major," noted Gore Vidal, "and Edith Wharton is one." Her Ethan Frome "shows a marked departure from the ironic contemplation of aristocratic mores... the central problem is that of the barriers imposed by local conventions upon an individual whose happiness depends on rising above them" (Hart 813). (Inventory #: 99339)
$2,000.00 add to cart or Buy Direct from
Raptis Rare Books
Share this item