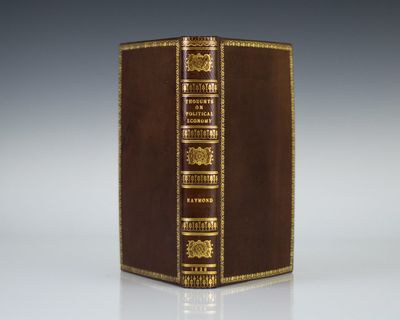 by Raymond, Daniel
Baltimore: Published by Fielding Lucas, Jun'r, 1820. First edition. Octavo, bound in full brown Russian diced calf. Gilt titles and tooling to the spine, front and rear panels, raised bands. In very good condition with some some browning and light staining to the some of the text. First editions are extremely rare. Daniel Raymond was the first important political economist to appear in the United States. He theorized that "labor creates wealth" which may have been an improvement based on the thinking of Adam Smith of Europe. Daniel Raymond thought that the economy of England was actually the economy of the higher-ranking members of that society, and not the economy of the entire nation. He held that wealth is not an aggregation of exchange values, as Adam Smith had conceived it. Daniel Raymond held that wealth is the capacity or opportunity to acquire the necessaries and conveniences of life by labor. "Thoughts on Political Economy is the first systematic work on this subject by an American"--Howes R82 ("aa"). Sabin 68042. (Inventory #: 20088)
$9,500.00 add to cart or Buy Direct from
Raptis Rare Books
Share this item