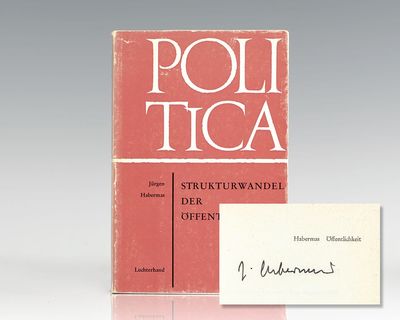 by Habermas, Jurgen
Neuwied-Berlin: Hermann Luchterhand Verlag, 1962. Rare first German edition of Jurgen Habermas' first major work. Octavo, original wrappers as issued. Signed by Jurgen Habermas on the half-title page. In near fine condition with light rubbing and wear. German sociologist and philosopher Jurgen Habermas' first major work, The Structural Transformation of the Public Sphere, remains an important contribution to the modern understanding of democracy and is widely credited for creating the discipline of media studies. Since publication, the work has been reprinted and translated many times and has become enormously influential for scholars of political science, rhetoric, and intellectual historians. (Inventory #: 92498)
$2,500.00 add to cart or Buy Direct from
Raptis Rare Books
Share this item