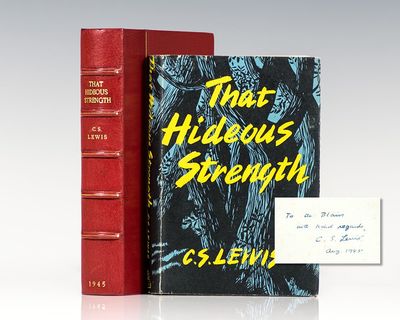 by Lewis, C.S
London: John Lane, The Bodley Head, 1943. First edition of the final novel in Lewis' acclaimed Space Trilogy. Octavo, original cloth. Presentation copy, inscribed by C.S. Lewis to fellow writer and journalist George Orwell and his wife (Eric and Eileen Blair) on the front free endpaper, "To the Blairs, with kind regards, C.S. Lewis Aug. 1945." This is the review copy used in George Orwell's literary review of the book which was published in the Manchester Evening News on August 16th 1945. Also with three hand-corrections to the text in Lewis' hand which he made in all review copies before personally sending to critics. Although Lewis and Orwell were not close friends, both were employed as radio journalists by the British Broadcasting Corporation (BBC) during WWII, an era that transformed both religious broadcasting (in which Lewis became a primary figure) and war correspondence (Orwell's experience as a correspondent working out of the basement of the BBC during wartime was a major inspiration for his masterpiece Nineteen Eighty-Four). Very good in a very good dust jacket. Housed in a custom half morrocco clamshell box. A remarkable association. According to biographer A. N. Wilson, Lewis began The Space Trilogy after a conversation with J.R.R. Tolkien in which both men lamented the state of contemporary fiction. They agreed that Lewis would write a space-travel story, and Tolkien would write a time-travel one. Tolkien's story only exists as a fragment, published in The Lost Road and other writings (1987) edited by his son Christopher. "[Lewis's] book describes the struggle of a little group of sane people against a nightmare that nearly conquers the world. A company of mad scientists - or, perhaps, they are not mad, but have merely destroyed in themselves all human feeling, all notion of good and evil - are plotting to conquer Britain, then the whole planet, and then other planets, until they have brought the universe under their control. All superfluous life is to be wiped out, all natural forces tamed, the common people are to be used as slaves and vivisection subjects by the ruling caste of scientists, who even see their way to conferring immortal life upon themselves. Man, in short, is to storm the heavens and overthrow the gods, or even to become a god himself - George Orwell, Manchester Evening News, 1945. (Inventory #: 81218)
$30,000.00 add to cart or Buy Direct from
Raptis Rare Books
Share this item