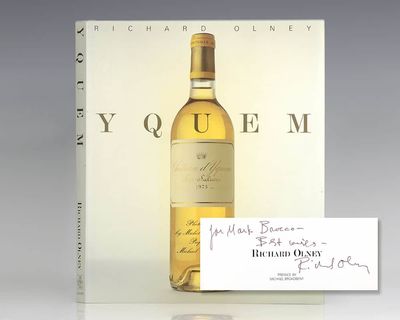 by Olney, Richard
Boston: David R. Godine, Publisher, 1986. First edition of this wonderfully illustrated work on the legendary Yquem Winery. Quarto, original cloth, illustrated throughout. Presentation copy, inscribed by the author on the title page, "For Mark Brocco- Best wishes- Richard Olney." Photographs by Michel Guillard. Preface by Michael Broadbent. Designed by Marc Walter. This lavishly illustrated book, titled simply Yquem, is a story of single-minded dedication to an almost impossible goal: year in and year out, wresting one of the greatest wines ever from the often uncooperative soil and climate of southwestern France. It is the story of a property and also of the Lur Saluce family and their predecessors, the Sauvages, who have owned and cultivated that property since the 16th century. Yquem is one of the legendary wine chateaux. Its history can be traced from the marriage of Eleanor of Aquitaine to Henry Plantagenet in 1152. Its wines were praised by Thomas Jefferson, who bought them for himself and for the cellar of his friend George Washington. Czars have had them bottled in crystal, and even today, when sweetness is out of fashion, Yquem is perhaps the most sought-after of all collectors' wines. (Inventory #: 92422)
$475.00 add to cart or Buy Direct from
Raptis Rare Books
Share this item