The World Set Free: A Story of Mankind. 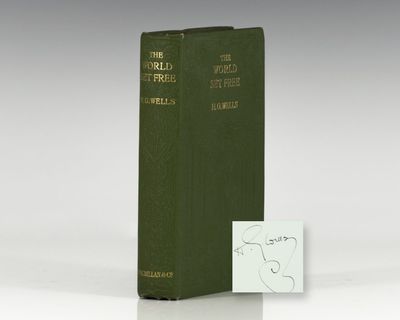 by Wells, H.G
London: Macmillan and Co., Limited, 1914. First edition, second printing, published the same month as the first. Octavo, original cloth, gilt titles to the spine and front panel, gilt topstain. Boldly signed by H.G. Wells on the dedication page. In near fine condition with light rubbing to the spine tips. Uncommon signed. The World Set Free is a novel written in 1913 and published in 1914 by H. G. Wells. The book is based on a prediction of nuclear weapons of a more destructive and uncontrollable sort than the world has yet seen. It had appeared first in serialized form with a different ending as A Prophetic Trilogy, consisting of three books: A Trap to Catch the Sun, The Last War in the World and The World Set Free. Wells's knowledge of atomic physics came from reading William Ramsay, Ernest Rutherford, and Frederick Soddy; the last discovered the disintegration of uranium. Soddy's book Wealth, Virtual Wealth and Debt praises The World Set Free. Wells's novel may even have influenced the development of nuclear weapons, as the physicist Leo Szilard read the book in 1932, the same year the neutron was discovered. In 1933 Szilard conceived the idea of neutron chain reaction, and filed for patents on it in 1934. (Inventory #: 52038)
$1,250.00 add to cart or Buy Direct from
Raptis Rare Books
Share this item