The Face of Asia. 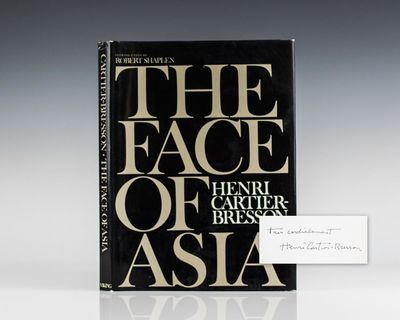 by Cartier-Bresson, Henri; Introduction by Robert Shaplen
New York: The Viking Press, 1972. First edition. Quarto, original cloth. Signed by the photographer on the half title page, "Tres cordialement Henri Cartier-Bresson." Fine in near fine dust jacket. In more than 40 years as a photographer, Henri Cartier-Bresson wandered continually around the world. But there was nothing compulsive about his travels, and he explicitly expressed a desire to move slowly, to "live on proper terms" in each country, to take his time, so that he became totally immersed in the environment. His Leica--his notebook, as he called it--accompanied him wherever he went, and, consistent with his training as a painter, he always carried a small sketch pad. There was for Cartier-Bresson a kind of social implication in the camera. To his mind, photography provided a means, in an increasingly synthetic epoch, for preserving the real and humane world. (Inventory #: 5642)
$1,500.00 add to cart or Buy Direct from
Raptis Rare Books
Share this item