My Land and My People: The Memoirs of His Holiness The Dalai Lama. 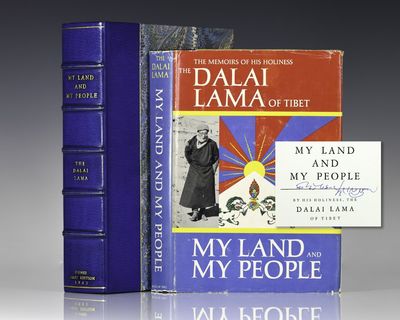 by The Dalai Lama of Tibet
New York: McGraw-Hill Book Company, Inc, 1962. First edition of the Dalai Lama's first autobiography. Octavo, original half cloth, illustrated. Signed by His Holiness the Dalai Lama on the title page with the added words "with prayers." Near fine in a near fine dust jacket with light rubbing. Housed in a custom half morocco clamshell box. Recognized at the age of two as the reincarnation of the Thirteenth Dalai Lama, Tenzin Gyatso was brought to Lhasa, the capital of Tibet, and enthroned two years later as the fourteenth Dalai Lama. In 1959, following the Chinese suppression of the Tibetan national uprising, he was forced to seek asylum in India. As Tibet's leader-in-exile, he has worked tirelessly not only on behalf of the Tibetan people but as a voice for human rights worldwide. "My Land and My People is, without a doubt, one of the most moving memoirs I have ever read" (Stanley Gosh, Saturday Review). (Inventory #: 30019)
$6,200.00 add to cart or Buy Direct from
Raptis Rare Books
Share this item