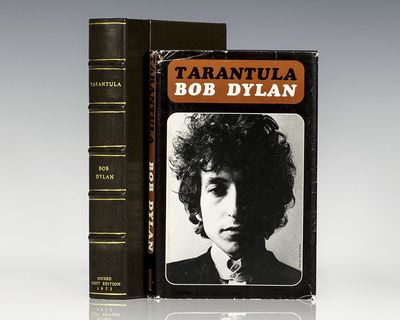 by Dylan, Bob
New York: MacMillan & Company, 1966. First edition of Dylan's first book. Octavo, original cloth. Signed by Bob Dylan on the half-title page. Fine in a near fine dust jacket with some light wear to the extremities. Housed in a custom half morocco clamshell box. Rare and desirable signed by Dylan. Written in 1966, Tarantula is a collection of poems and prose that evokes the turbulence of the times in which it was written, and gives a unique insight into Dylan's creative evolution. It captures Bob Dylan's preoccupations at a crucial juncture in his artistic development, showcasing the imagination of a folk poet laureate who was able to combine the humanity and compassion of his country roots with the playful surrealism of modern art. Angry, funny, and strange, the poems and prose in this collection reflect the concerns found in Dylan's most seminal music: a sense of protest, a verbal playfulness and spontaneity, and a belief in the artistic legitimacy of chronicling everyday life and eccentricity on the street. (Inventory #: 75081)
$12,500.00 add to cart or Buy Direct from
Raptis Rare Books
Share this item