A Million and One Nights: A History of the Motion Picture. 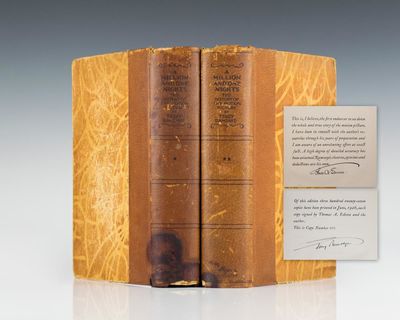 by Edison, Thomas Alva & Terry Ramsaye
New York: Simon and Schuster, 1927. Signed Limited edition, one of 327 copies. Quarto, original half pigskin over boards, top edge gilt, 2 volumes. Signed by Thomas Edison on the limitation page and additionally signed by Ramsaye. Illustrated with numerous photographic plates. Some staining to lower section of spines, some rubbing and edgewear to boards, a very good set. Copies of the limited edition were also bound in cloth, this is the more uncommon leather bound edition. A Million and One Nights: A History of the Motion Picture is the first important study of the history and development of moving pictures, beginning before Edison's Kinetoscope up to and including the silent film era. Written by Terry Ramsaye, later the editor-in-chief of Pathe News and Pathe Audio Review. (Inventory #: 5697)
$4,500.00 add to cart or Buy Direct from
Raptis Rare Books
Share this item