A Treatise on Government. Translated From The Greek of Aristotle. 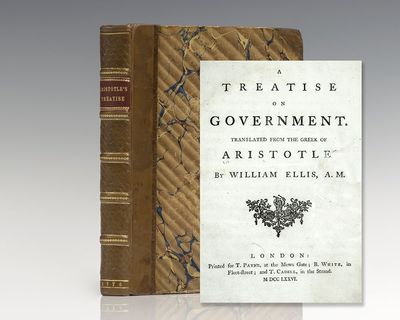 by Aristotle; Translated by William Ellis
London: T. Payne, 1776. First edition in English of this important work on government by Aristotle. Quarto, bound in three quarters leather over marbled boards. In very good condition with light toning to the text and wear. Bookseller plate of George Gregory, Bath, Sept. 22, 1936 on the front pastedown. Translated by William Ellis. First editions are rare, with the last example appearing at auction in 1914. An important text in both the history of philosophy and in sparking the development of western political democracy. Ellis' translation was the first direct into English from the original Greek of Aristotle's "Politics." (Loys Le Roy translated this work into French, which was subsequently translated into English in 1597. Ellis' translation is considered more accurate, and for many the most important translation in bringing Aristotle's treatise to enlightenment statesmen and philosophers. The bibliographer Lowdnes notes that Ellis work appeared in this quarto edition 1776 priced at 15 shillings, and was reprinted (with little change) in 1778. Lowndes praises Ellis' edition as, "A faithful and perspicuous version." Aristotle On Government via this English translation became was a landmark text in the history of Western political thought, a text which influenced late 18th and 19th century political thought in the English speaking world. Dr. B. E. Bryant notes that Thomas Jefferson owned a copy of the Ellis translation which influenced his drafting of the American Declaration of Independence: "Like most other well-educated individuals of his day, Jefferson was thoroughly exposed to classical philosophy.[24] We know for certain he owned a copy of the William Ellis, 1776 translation of Aristotle's Politics, and even cited Aristotle as one of the sources he used for the Declaration [of Independence].[25]" Aristotle's "On Government" constitutes the first treatise of the conditions under which philosophy is possible within politics, and thus the work that as much as any other founded political philosophy. The influence that this work has had on later political thinking is difficult to exaggerate, and the fact that the work became available in a translation into English directly from the original Greek has been of the utmost importance to the development of political thought in England and America. Ellis' Aristotle is the only 18th century translation, a an accurate and smoothly readable version that is still in print after more than 200 years. (Inventory #: 81182)
$18,000.00 add to cart or Buy Direct from
Raptis Rare Books
Share this item