The Dark Tower: The Gunslinger. 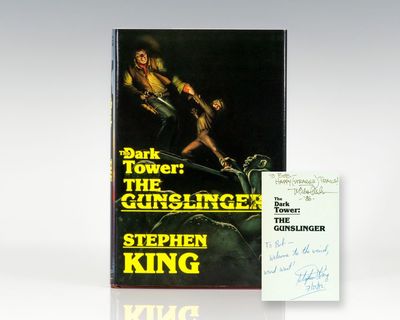 by King, Stephen
West Kingston, Rhode Island: Donald M. Grant Publisher, Inc, 1982. First edition of the author's first book in his acclaimed Dark Tower Series. Octavo, original cloth, pictorial endpapers, illustrated by Michael Whelan. Presentation copy, inscribed by the author on the half-title page in the year of publication, "To Bob- Welcome to the weird, weird West! Stephen King 7/25/82." Also inscribed the illustrator, "To Bob Happy (Strange) Trails! Michael Whelan '86." Fine in a fine dust jacket. The first volume in his Dark Tower series, Stephen King has often described The Gunslinger as his magnum opus. A striking combination of Western fiction, science fiction, and horror, the story follows the dark and mysterious 'last gunslinger', Roland Deschain, in his lifetime pursuit of his rival, the 'man in black'. The film adaptation was released in August of 2017 by Columbia Pictures, starring Idris Elba and Matthew McConaughey. (Inventory #: 52008)
$5,500.00 add to cart or Buy Direct from
Raptis Rare Books
Share this item