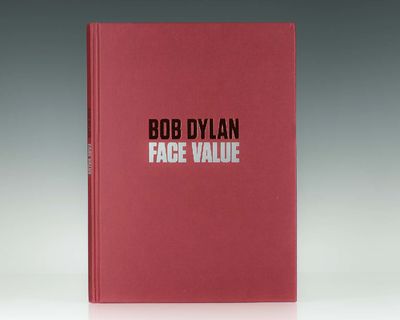 by Dylan, Bob & John Elderfield
London: National Portrait Gallery, 2014. Signed limited edition, number 20 of 21 signed copies. Quarto, original cloth, illustrated. Signed and numbered by Bob Dylan on the title page. In fine condition. With over 500 songs, 46 albums and a 110 million record sales to his name, Bob Dylan, is turning increasingly to another mode of artistic expression; one that has occupied him throughout his life, but for which he is much less well known. Although Dylan has sketched and drawn since childhood and painted since the late 1960s, only relatively recently has he begun to exhibit his artworks. The 12 works collected in this beautifully produced volume represent his latest foray into portraiture. In an illuminating essay and a rare question and answer session with Dylan, curator and art historian John Elderfield explores the story behind these works. For Elderfield, Dylan's paintings, like his songs, are "products of the same extraordinary, inventive imagination, the same mind and eye, by the same story-telling artist, for whom showing and telling ... are not easily separated." (Inventory #: 36073)
$4,500.00 add to cart or Buy Direct from
Raptis Rare Books
Share this item