Second Letter Concerning Toleration and A Third Letter for Toleration. 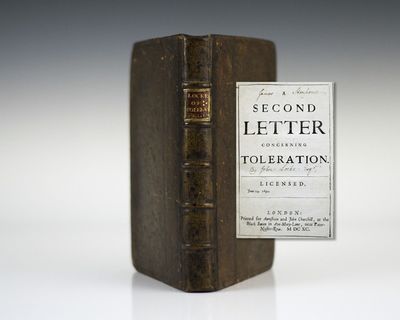 by Locke, John
London: Awnsham and John Churchill, 1690, 1692. First editions of both volumes of Locke's Second and Third Letter Concerning Toleration. Two volumes bound in one. Octavo, contemporary calf, rebacked. In excellent condition with the text clean contents clean, except for light browning, rebacked. From the library of James Stonhouse with his signatures and armorial bookplate. Exceptionally rare. The Second Letter Concerning Toleration is a response to the attack on A Letter concerning Toleration Locke's The Argument of the 'Letter concerning Toleration' Briefly Consider'd and Answer'd. In the first letter Locke had claimed 'Toleration to be the chief Characteristical Mark of the True Church'. His views on religious toleration continued to be the subject of controversy and he penned two more letters, the fourth of which was published posthumously. (Inventory #: 19072)
$20,000.00 add to cart or Buy Direct from
Raptis Rare Books
Share this item