The Second World War: The Gathering Storm; Their Finest Hour; The Grand Alliance; The Hinge of Fate; Closing the Ring; Triumph and Tragedy. 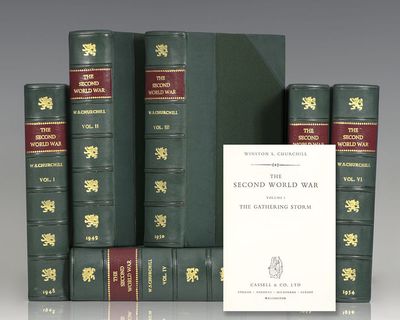 by Churchill, Winston S
London: Cassell & Co, 1948-54. First editions of Winston Churchill's masterpiece. Octavo, six volumes. Bound in three-quarters green morocco, gilt titles and tooling to the spine, red morocco spine label, with the rampant lion in gilt on the spines, top edge gilt, maps present. In fine condition. "Winston Churchill himself affirmed that this is not history: this is my case" (Holmes, 285). Churchill was re-elected to the post of Prime Minister in 1951. "The Second World War is a great work of literature, combining narrative, historical imagination and moral precept in a form that bears comparison with that of the original master chronicler, Thucydides. It was wholly appropriate that in 1953 Churchill was awarded the Nobel Prize for Literature" (Keegan). Named by Modern Library as one of the 100 best non-fiction books of the twentieth century. It placed number one on the 100 best non-fiction books of the twentieth century by National Review magazine. (Inventory #: 98765)
$2,200.00 add to cart or Buy Direct from
Raptis Rare Books
Share this item