Partners: The United Nations and Youth. 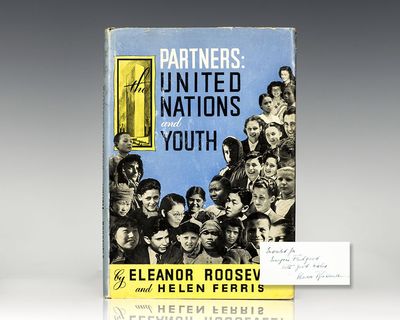 by Roosevelt, Eleanor & Helen Ferris
Garden City, NY: Doubleday, 1950. First edition of this work which tells the dramatic story of the United Nations. Small quarto, original cloth, pictorial endpapers, illustrated. Inscribed by Eleanor Roosevelt on the half-title page, "For Marjorie friedgood with good wishes Eleanor Roosevelt." Very good in a very good dust jacket. Jacket by Rafael Palacios. Following her husband's death, Eleanor Roosevelt remained active in politics for the rest of her life. She pressed the United States to join and support the United Nations and became one of its first delegates. She served as the first chair of the UN Commission on Human Rights, and oversaw the drafting of the Universal Declaration of Human Rights. Later she chaired the John F. Kennedy administration's Presidential Commission on the Status of Women. By the time of her death, she was regarded as "one of the most esteemed women in the world"; she was called "the object of almost universal respect" in her New York Times obituary. In 1999, she was ranked ninth in the top ten of Gallup's List of Most Widely Admired People of the 20th Century. (Inventory #: 62052)
$2,200.00 add to cart or Buy Direct from
Raptis Rare Books
Share this item