The Revolt of the Cockroach People. 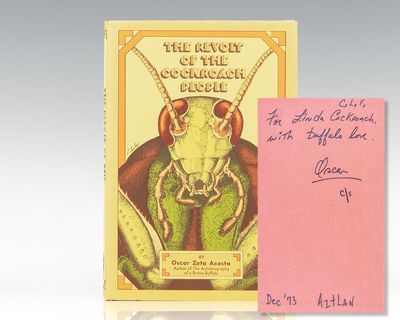 by Acosta, Oscar Zeta
San Francisco: Straight Arrow Books, 1973. First edition of Oscar Zeta Acosta's final novel, published a year before his disappearance. Octavo, original cloth. Presentation copy, inscribed by the author on the front pastedown in the year of publication, "For Linda Cockroach, with buffalo love. Oscar C/S Dec. 73 AZTLAN." Near fine in a near fine dust jacket. Jacket design by Frank Ansley. Books signed and inscribed by Zeta Acosta are rare. Before his mysterious disappearance and probable death in 1974, Oscar Zeta Acosta was famous as a Robin Hood Chicano lawyer and notorious as the real-life model for Hunter S. Thompson's "Dr. Gonzo" a fat, pugnacious attorney with a gargantuan appetite for food, drugs, and life on the edge. In this exhilarating sequel to The Autobiography of a Brown Buffalo, Acosta takes us behind the front lines of the militant Chicano movement of the late sixties and early seventies, a movement he served both in the courtroom and on the barricades. Here are the brazen games of "chicken" Acosta played against the Anglo legal establishment; battles fought with bombs as well as writs; and a reluctant hero who faces danger not only from the police but from the vatos locos he champions. What emerges is at once an important political document of a genuine popular uprising and a revealing, hilarious, and moving personal saga. (Inventory #: 87456)
$2,800.00 add to cart or Buy Direct from
Raptis Rare Books
Share this item