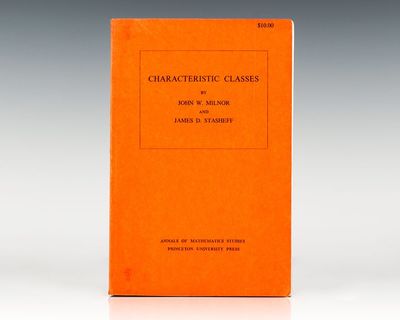 by Milnor, John W. and James D. Stasheef
Princeton, NJ: Princeton University Press, 1974. First edition. Octavo, original wrappers. Signed by John Milnor on the title page. In very good condition, name to the half-title page and pastedown. The theory of characteristic classes provides a meeting ground for the various disciplines of differential topology, differential and algebraic geometry, cohomology, and fiber bundle theory. As such, it is a fundamental and an essential tool in the study of differentiable manifolds. In this volume, the authors provide a thorough introduction to characteristic classes, with detailed studies of Stiefel-Whitney classes, Chern classes, Pontrjagin classes, and the Euler class. Three appendices cover the basics of cohomology theory and the differential forms approach to characteristic classes, and provide an account of Bernoulli numbers. Based on lecture notes of John Milnor, which first appeared at Princeton University in 1957 and have been widely studied by graduate students of topology ever since. (Inventory #: 57021)
$975.00 add to cart or Buy Direct from
Raptis Rare Books
Share this item