The Public Papers of Grover Cleveland, Twenty-Second President of the United States. 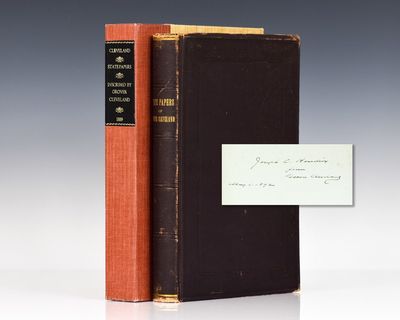 by Cleveland, Grover
Washington DC: Government Printing Office, 1889. First edition of the collected papers of Grover Cleveland. Quarto, original brown cloth. Presentation copy, inscribed by the author on the front free endpaper, "Joseph C. Hendrix, from Grover Cleveland, May 1, 1892." In very good condition with light rubbing and wear. Housed in a custom clamshell box. Rare and desirable signed and inscribed by President Cleveland. Grover Cleveland was a lawyer who was the 22nd and 24th President of the United States. He won the popular vote for three presidential elections - in 1884, 1888, and 1892 - and was one of two Democrats (with Woodrow Wilson) to be elected president during the era of Republican political domination dating from 1861 to 1933. He was also the first and to date only President in American history to serve two non-consecutive terms in office. Cleveland was the leader of the pro-business Bourbon Democrats who opposed high tariffs, Free Silver, inflation, imperialism, and subsidies to business, farmers, or veterans. His crusade for political reform and fiscal conservatism made him an icon for American conservatives of the era. Cleveland won praise for his honesty, self-reliance, integrity, and commitment to the principles of classical liberalism. He fought political corruption, patronage, and bossism. "All of his biographers have noted the president's distinctive temperament. 'He possessed honesty, courage, firmness, independence, and common sense,' wrote Allan Nevins, who subtitled his classic biography A Study in Courage... During his administrations the municipal, state, and federal governments adopted numerous new laws, anticipating the reforms of the Progressive Era. By and large Cleveland viewed this legislation as practical responses to contemporary problems. In his willingness to accept most incremental reforms, Cleveland exhibited an eminently American approach to statecraft" (ANB). (Inventory #: 32089)
$4,500.00 add to cart or Buy Direct from
Raptis Rare Books
Share this item