Golf Is My Game. 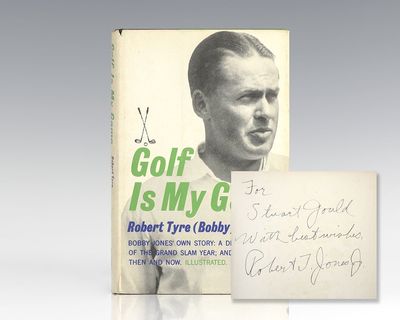 by Jones, Robert T. [Bobby]
New York: Doubleday & Company, 1960. First edition of this classic golfing technique manual. Octavo, original half cloth, illustrated. Presentation copy, inscribed by the author on the front free endpaper, "For Stuart Gould with best wishes Robert T. Jones Jr." Laid in is an invitation to a star-studded Tribute to Bobby Jones held on Saturday, June 19th 1976 as well as a brochure to the Robert T. Jones, Jr. Room situated in the Atlanta Athletic Room. Near fine in a near fine dust jacket. Jacket design by Ben Feder. "Jones left an enduring legacy of athletic prowess and exemplary personal characteristics. No one is likely to break his records of 13 U.S. and British national championships, and four in one year (he won the U.S. Open a total of four times, the U.S. Amateur five times, the British Open three times, and the British Amateur one time) The Masters seems to have a secure place in the pantheon of golf; and the name Bobby Jones will continue to represent the highest standards of amateurism, sportsmanship and self-mastery" (ANB). (Inventory #: 89087)
$3,800.00 add to cart or Buy Direct from
Raptis Rare Books
Share this item