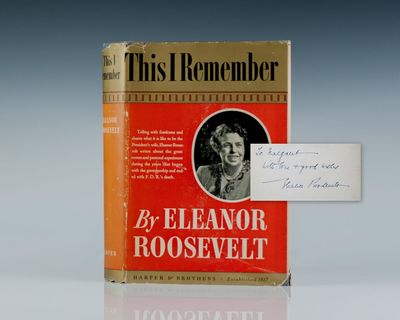 by Roosevelt, Eleanor
New York: Harper & Brothers Publishers, 1949. First edition of Eleanor Roosevelt's wonderful autobiography. Octavo, original blue cloth. Illustrated with 41 photographs of the Roosevelt family, including frontispiece of the First Lady. Warmly inscribed by the author on the front free endpaper, "To Margaret with love & good wishes Eleanor Roosevelt." Near fine in a very good that is lightly chipped along the top edge. "Convinced that when you cease to make a contribution, you die, Eleanor Roosevelt remained at the center of American and global politics for nearly two more decades She became a fearless international champion of progressive causes and perhaps the most influential American woman of the 20th century" (ANB). (Inventory #: 5552)
$2,200.00 add to cart or Buy Direct from
Raptis Rare Books
Share this item