The Catcher In the Rye, Nine Stories, Raise High the Roofbeam, Franny and Zoey, 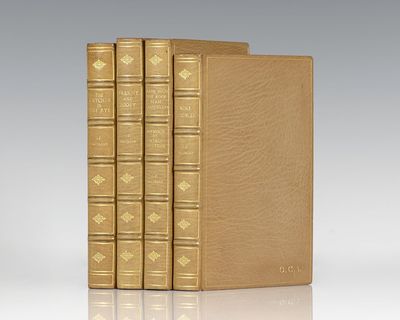 signed first edition
by Salinger, J.D
Finely bound by Sangorski and Sutcliffe of the works of J.D. Salinger. Octavo, bound in full morocco, gilt titles to the spine, gilt ruled to the spine, front and rear panels, raised bands, marbled endpapers. In fine condition. J.D. Salinger's first critically acclaimed story, A Perfect Day for a Bananafish (1948), appeared in New Yorker Magazine, which would publish much of his later work. Published in 1951, Salinger's best known and immensely successful novel, The Catcher in the Rye, was followed by Nine Stories (1953), Franny and Zooey (1961), and two novellas, Raise High the Roof Beam, Carpenters and Seymour: An Introduction (1963). (Inventory #: 90451)
$2,800.00 add to cart or Buy Direct from
Raptis Rare Books
Share this item